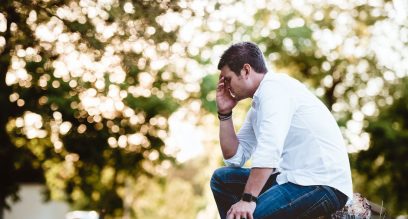 Worry is something we do in our lives at one point or another. It is inevitable, and only those who know how to handle it best can release the grip their worries have over them and find happiness in every moment!

Worry is often a form of doubt, insecurity, or projection of your mental state onto the world and possibilities around you. If hope is the optimistic form of perspective, than worry is the pessimistic form.

Worry simply means that you expect or, in the very least, give power to the negative mental state of projecting negative possibilities. In all, it is your ability to think about what could go wrong as opposed to what could go right.

As you can guess, it is an entirely debilitating and unstable state to be living in. We don’t like to worry, but evidence suggests that worrying is a more natural state of mind than optimism is. This is due to our survival instincts and our brain’s natural designation to place more emphasis on avoiding pain than it does on gaining pleasure.

Whether you are a worrywart or not, the following 4 points MUST occur in some fashion within your mind to relieve your worries and allow you to become more optimistic or hopeful for the future. You can use these points as a “sanity check” for whether you are worrying about something useful or about something that is purely debilitating.

The 4 steps will follow this structure:
Step 1: Become Aware
Step 2: Fix What is Within Your Power
Step 3: Accept What is Outside of Your Control
Step 4: Move On

By doing these four things, which I will explain in further detail, you can produce some amazing effects! Some of these effects are as follows…

I would quickly like to point out the difference between useful and non-useful worry. That difference is merely whether or not worrying in a certain instance allows you to better prepare for things you can control later. Worrying outside of your state of control is always entirely debilitating.

Without further ado, let’s get into it!

Many people suffer from chronic worrying. That is to say, they worry without a cause or reason in some instances, and find themselves to be overwhelmed or depressed due to having such an extreme focus on what is (or could) be going wrong in life.

Knowing why is what makes the difference obvious between worry and what you can do about it. For example, it is one thing to state that you worry about money, but, I’ve heard many self-made millionaires state that they worry about money. Do you suppose they are being truthful? Perhaps some of them, but I’m sure not all of them.

That is not to say they are lying, more so that they are unaware of the true reasons behind their worrying tendencies. Often times, we take our true fears and insecurities and project those issues onto something non-related in an attempt to vent frustration without having to deal with the pain of the immediate issue.

The result of this wrongful projection of worry can be summed up by a few unfortunate key characteristics in people. Those people exhibit characteristics like chronic complaining, pessimism, and victimhood.

As we know, none of these characteristics are beneficial or healthy to our personal or social lives.

You must become aware of your emotions and decide to accept your frustrations. By becoming aware, you will have practiced the most necessary step of the process. Most people who become aware of their emotions or worries already practice some remedy or logic that is necessary to quell them and let go of what is not useful worrying.

Don’t attempt to become indifferent to your emotions, simply try and control them. Becoming indifferent dissolves away the power you have to convert negatives into positives!

Gay Hendricks, author of The Big Leap says that most of all worrying takes place to uncover something good somewhere. make a habit of looking for that “something good.”

Step 2: Fix What is Within Your Direct Power to Fix

Consider a new project that your organization is putting together. Perhaps you are part of a team and have delegated responsibilities. Ask yourself, once you are finished performing to the best of your ability on your own work, what use is worrying about the work of others?

Many people state that it is the job of the project leader to worry about the work of others, but I disagree. I believe that any good leaders job is not to stress but, rather, to emphasize the importance of each person’s power and resources available to do their job to the best of their abilities.

Stress is only useful when it is controllable by you. Only with useful stress will you be motivated to grow, fix your own issues, and escape certain feelings like unhappiness or negativity.

Non-useful stress is a result of things outside of your control, and therefore, cannot motivate you to take action towards its own resolution.

.Fix what you can fix alone. Your attempts to control the actions or thoughts/opinions from others comes across as needlessly controlling and defiantly untrusting. Think of micromanagement. Is micromanagement something you enjoy? Probably not.

The truth is, if there is more than one person in an organization, then there is certainly what I call “Miscommunication Costs.” Miscommunication costs are all the mistakes, false blame, lack of motivation, and lack of useful communication between all people in the workplace. And it is very, very, expensive.

Just to give you an idea of how expensive it is, imagine how well your organization would perform if every single person knew exactly what to achieve, and perfectly performed their required duties.

Ultimately, the emphasis here is to take your own power into consideration to remedy your worries and concerns. Only when you can do this can you move on to the next step effectively.

Step 3: Accept What is Outside of Your Control

Here is the million-dollar question, “Why worry about things you cannot change? What good comes of it?” The answer is “not much.”

When we worry about things that are not within our direct control, we slip into the state of chronic worrying. We do this because we have allowed ourselves to indulge in worrying that is neither useful nor effective.

Accepting what is outside of your direct control is difficult to do. It is hard because we don’t like leaving things up to chance, in fact, the human brain associates ambiguity with large amounts of fear.

The key to this point is acceptance, NOT avoidance. Only when we can accept that which we cannot change can we practice the art of letting go of our worries and fears, and allowing hope and positivity to control our minds and actions.

Mark Manson, in his book, The Subtle Art of Not Giving a F*ck, says quite bluntly, “Don’t try.” What he means is, don’t buy in to what you hear about unending and constant happiness. Mark Manson recognizes that believing unending happiness exists is a debilitating state to live in because it causes us to continuously avoid the power we have to make changes in our lives.

It’s often considered a controversial book, but it makes sense through that lens. Believing that sadness and adversity shouldn’t exist is a perfect way to avoid the power you have to change the way you feel. Merely because you feel as though sadness and adversity can’t be helped, and that you have no power to change, which causes you to avoid rather than accept.

Accepting that adversity and negativity are common and natural is a great way to put yourself into the mindset of someone who can take action to quell these issues. In the words of Mark Manson, “The farmer who has a difficult day says to himself, ‘well I guess life is like that sometimes’ and continues shoveling”

This farmer accepts and takes action on what he can. Only when we accept what is not ours to control can we properly let go of the associated negativity and find peace in the light of our own power.

What is, seemingly, the most simple step of the process is also the hardest. Ironically, this step is a requirement for truly letting go of worry and the associated negativity.

Although you may have accepted those things that are outside of your own control, dwelling on the issue is a great way to stir the pot and attempt to make sense of something that is over and done with. What is the use? I fully understand the use of reflective learning experiences, but undue dwelling on issues is similar to a chosen state of emotional imprisonment.

Here is an excellent, and highly relatable, example. Consider a break-up. Although what has happened is in the past, those who attempt to constantly look back and dwell on the issues will re-live the scenario and prolong their suffering for much longer than if they simply made the decision to learn and move on.

Quit asking “what if” questions, those questions only invite your imagination to do it’s worst on your mental and emotional state by re-living negative experiences. Take each moment as it comes and avoid living to far in the past and/or future.

It is often said that worry is a result of these states of mind: Living in the past and dwelling, or living in the future and anticipating negative events.

Here are the respective solutions to each issue. Avoid dwelling on the past by learning from what you can, and making the conscious decision to move on to bigger and better things. avoid living to far in the future by preparing for what you can control, and letting go of that which you can’t.

By doing these things, you can limit the amount of time you spend with unnecessary or non-useful worry, and therefore maximize and invite satisfaction and acceptance into your life.

By following these four steps you can take back the control you have of your life, make yourself more positive, and become more effective as a person in general.

Here’s a summary of the four steps for you to remember.

The 4 steps will follow this structure:
Step 1: Become Aware
Only when you know why you worry can you resolve the issue, and NOT a symptom of the issue.
Step 2: Fix What is Within Your Power
Worry is useful only when you have the power to resolve it.
Step 3: Accept What is Outside of Your Control
Let go of that which is not in your direct power, doing so will help you live in the present.
Step 4: Move On
Accepting is not the same as letting go, avoid dwelling on an issue and re-surfacing negative emotions.

Hopefully, I’ve helped you mitigate your worries and take the power you have back into your own hands! Never fall into the trap of useless worry ever again!

Thanks for reading!
Work With Austin!

-Austin Denison is a change management consultant from Southern California and founder/CEO of Denison Success Systems LLC. He is the author of The Essential Change Management Guidebook: Master The Art of Organizational Change as well as The Potential Dichotomy: The Philosophy of a Fulfilling Life.